The 20 year rule on long residence is an immigration directive which appears in the Immigration Rules, written by the Home Secretary and published by the Home Office under the power of section 3 of the Immigration Act 1971. It concerns the ability of undocumented migrants to regularise their status and subsequently—after a 10 year period of ‘continuous lawful residence’ in the UK—qualify for Indefinite Leave to Remain (ILR) via multiple applications for Limited Leave to Remain (LLR).

Introduced on 9th July 2012, the 20 year rule replaced the 14 year rule which formerly provided a shorter and more direct route to settlement. Prior to 2012, this route permitted undocumented migrants living in the UK to regularise their status by applying for ILR immediately following 14 years continuous residence.

Under the 20 year rule, in order to reach the same point of qualification for an ILR application, a person is required to have continuously resided in the UK for at least 30 years which includes at least 20 years continuous and precarious residence before they are able to make four separate successful applications for 30 months of LLR at a time, totalling a further 120 months or 10 consecutive years (see Fig.1). For comparison, the EU Settlement Scheme required over a million EU migrants to prove they had five years’ continuous residence before being granted settled status. As of May 2020, more than 3.3 million EU Settlement Scheme applications had been concluded of which 57% were granted settled status and 41% pre-settled status.

How does the 20 year rule work?

When an undocumented person has lived in the UK for 20 years, they can apply for LLR, which lasts 2.5 years (30 months). In order to have the opportunity to apply for indefinite leave to remain, an individual must apply and be granted LLR a total of 4 times consecutively in order to accrue 10 years. In reality, the 14 year rule has effectively been replaced by a 30 year rule to gain eligibility for an indefinite leave to remain application.

Fig 1. The route to permanent residency under the 20 year rule

Once undocumented, people are forced to become practically invisible to authorities through what have been described as ‘the circumstances of a marginal existence’, avoiding any means of being traced such as registering with ‘official’ institutions required for securing a contract of employment. In order to confidently satisfy the level of evidence required for an application for LLR according to the 20 year rule, an undocumented migrant faces a dilemma: risk the consequences of being forcibly removed from the UK by following official routes; or risk refusal of their LLR application by living in the shadows – thus making the provision of satisfactory evidence even more challenging.

The extent to which the Home Office will accept documentation as ‘official’ evidence of residency has been a key feature in cases reaching the Court of Appeal. This means that when relying on the 20 year rule, the confidence threshold for undocumented migrants to make an application to regularise their status via LLR is much higher than one might initially assume.

The 20 year rule significantly lengthens the timeframe during which undocumented migrants face severe limitations on their essential rights before being able to settle in the UK, experiencing sustained suffering and social exclusion as a result.

The Precarity of Undocumented Status

Being an undocumented migrant in the UK is a highly precarious state, with an estimated 800,000 – 1.2 million people being forced to live invisible lives on the margins of society. Following the Immigration Act 2014 and Immigration Act 2016, the state of invisibility in which undocumented migrants are required to live has led to many of their human rights being effectively denied by criminalising the right to work (limiting the ability to provide for themselves and their families) and rent, whilst limiting access to healthcare – contravening Article 25 of the UN Universal Declaration of Human Rights.

Presently, the total cost for gaining ILR according to the 20 year rule is £12,761 for a single person. This sum includes the cost of four separate applications for LLR of £1,033 each and the immigration health surcharge (IHS) of £1,560 per LLR application (£624 per year) culminating in the final ILR application cost of £2,389. When compared to the 14 year rule which was scrapped in 2012, the 20 year rule represents an increase of more than £11,000 in costs for an undocumented person to eventually be granted ILR. Applications for LLR are combined with the payment of the IHS for each 30-month period which creates a higher financial threshold and ensures that access to healthcare becomes linked to immigration status.

Legal Aid is not provided for those who wish to seek legal advice about, or appeal the refusal of, their applications for LLR or ILR under the 20 year rule. Those wishing to appeal a wrong decision must therefore be in a financial position to pay their own legal costs, which may amount to thousands of pounds, depending on the specific circumstances. The convoluted process of becoming regularised via the 20 year rule places a legal obstacle in the way of potential applicants, keeping them undocumented for longer.

Successful applicants for LLR face significant restrictions on their access to welfare. They are subjected to the condition of ‘no recourse to public funds’ (NRPF) which means that benefits such as Universal Credit, Housing Benefit and many other protective social rights are denied to them. Without this support, residents, who hope to eventually gain ILR through the 20 year rule, risk becoming undocumented if their personal circumstances change and they cannot afford to re-apply in order to remain with regularised status.

Once LLR is granted, undocumented migrants become understandably fearful of losing it because it would force them to start the process once more. Despite it appearing to be a change in quality of life, gaining LLR does not provide meaningful security due to the many conditions attached to it.

Undocumented migrants waiting to apply for LLR will seek work in order to earn an income to survive for the required time stipulated in the 20 year rule as well as raise funds to regularise their status when finally eligible, but their insecure status disadvantages their pay prospects and can fail to protect them from exploitation and abuse. The Trades Union Congress recently recommended that a person’s employment and immigration status should be treated as separate to protect them from mistreatment. In this context, the 20 year rule lengthens the period of time that undocumented migrants are at risk of being exposed to low pay, refusal of wages or dismissal without wages, coercion, and—particularly for young migrant women—gender based violence like sexual harassment, abuse and stalking. 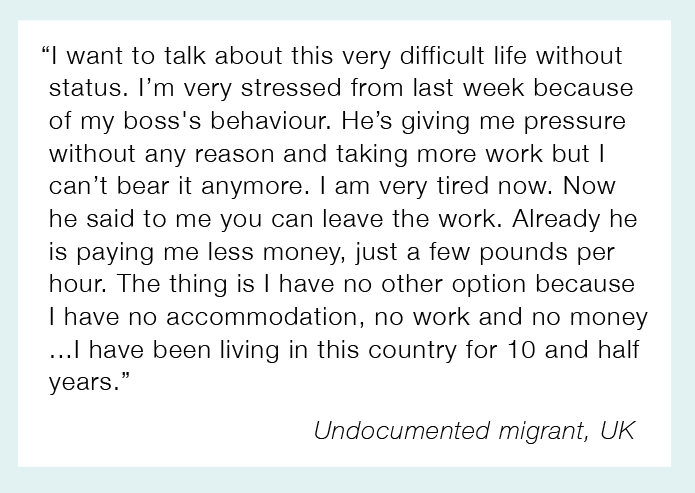 Due to laws preventing undocumented migrants from renting properties (currently enforceable only in England), an individual seeking regularisation via the 20 year rule will be placed in a highly vulnerable situation for the duration that they are undocumented. This includes exploitation from unscrupulous landlords or others who provide them with housing and a real threat of becoming homeless. Due to fear of being reported to the Home Office, undocumented migrants are less likely to seek advice regarding exploitation and abuse (including sexual abuse) as a result of their housing situation – even if they have been made destitute in the process of trying to escape such circumstances.

Despite the misconception that all undocumented migrants do not pay tax, there are situations where appropriate tax is paid but the individual’s access to state provision still remains inhibited. Undocumented migrants also pay tax by other means including VAT and indirectly through generating profits for the businesses and companies they work for.

According to a recent report by the National Audit Office, public spending on immigration enforcement by the Home Office reached £392 million in 2019-2020. The report states that enforcement agencies ‘facilitated the departure’ for 13,100 people without leave to remain. The imposition of the 20 year rule continues to place up to 1.2 million undocumented migrants at risk of being ‘forcibly removed’ while spending close to an average of £30,000 per person removed from the country. For the sake of comparison, enforcement costs (based on enforced removals carried out in 2019-20) reflect a situation where 99.9% of undocumented migrants remain in the UK. The current enforcement strategy means that if all undocumented people were to be forcibly removed in the same manner, the cost to the exchequer would be between £24 billion and £36 billion – equivalent to the total cost of educating 500,000 children from primary school through to university age.

It is clear that the Home Office is willing to spend many thousands enforcing a person’s immigration status – spending that the 20 year rule unnecessarily extends.

Download the full briefing from the link below to see our recommendations.

Our Regularise blog provides insight and discussion about the issues that affect undocumented migrants in the UK. Along with sharing stories and experiences, this is a place to congregate, share, learn and form communities in solidarity.